Take a deep breath. Unclench your jaw. Relax your shoulders.

The MFP is an initiative staffed by ANA with funding from SAMHSA, making fellowships available to ethnic and racial psychiatric nursing students who are enrolled full time in an accredited master’s/doctoral nursing program. 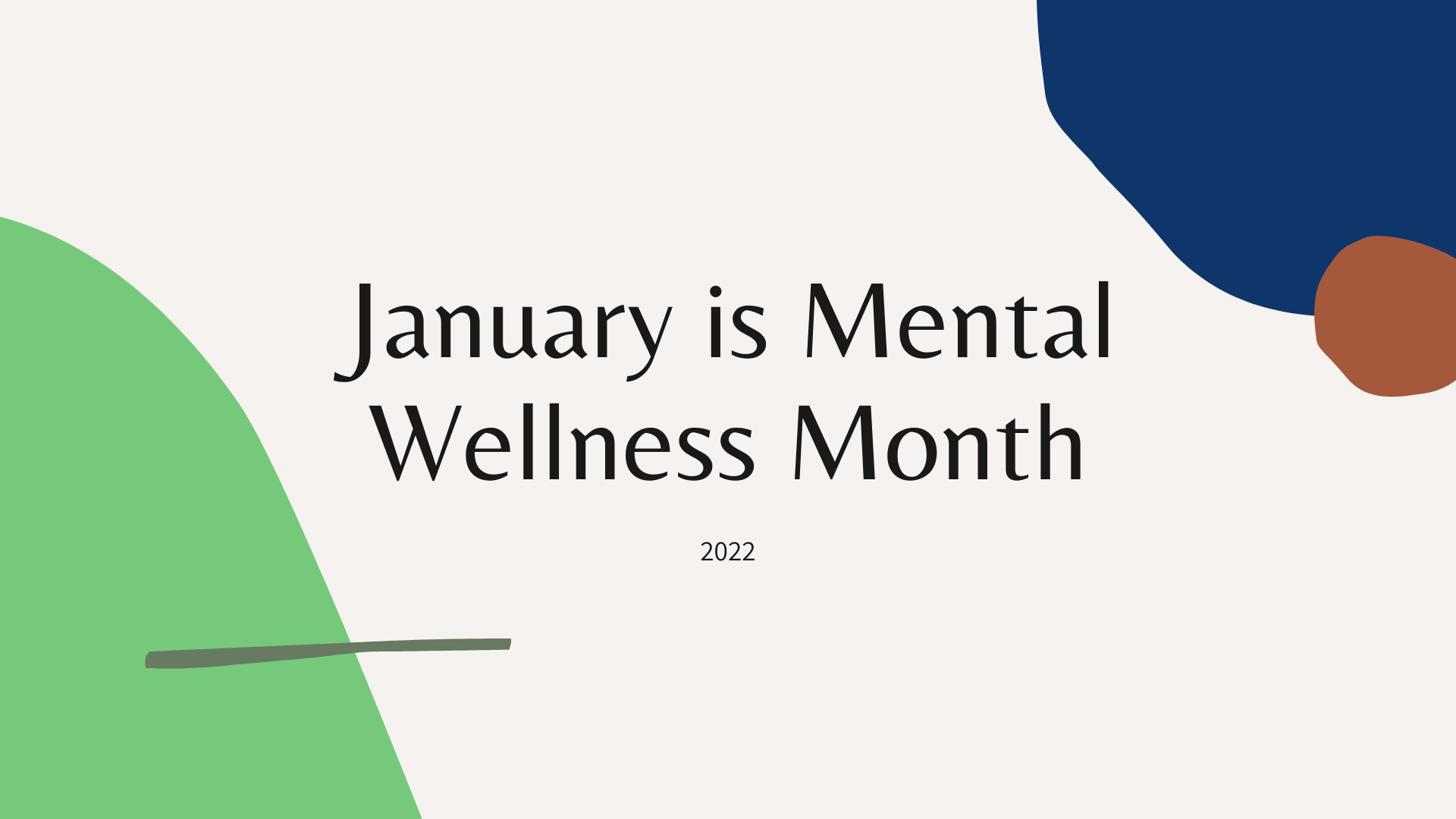 How Do You Value Your Time (and the Time of Others)? (opens new window)

One of the ways I think being a Black pansexual trans woman affects my hypertension directly is stress.... I hadn’t had super high blood pressure until I came out.... It’s a mental exercise to leave the house now, you know, and to feel confident enough that you would get from point A to point B and back to point A safely.... On a racial level, there’s a societal stigma that Black people aren’t intelligent. R (opens new window)ead more (opens new window)

Mental health stigma is pervasive in the Hispanic/Latinx community. These long-standing negative beliefs surrounding mental health are attributed to various cultural complexities, such as the tendency to keep personal challenges private and the harsh stereotypes affiliated with those who suffer from mental health issues. Read more (opens new window)

When Keondra Williams went to her first support group meeting for Alzheimer’s caregivers in Cobb County, she felt more alone than ever. All the caregivers in the meeting where older white women. Williams, who was in her early 40s at the time, was Black and a mother of one then-teen and two adult children. Read more (opens new window) 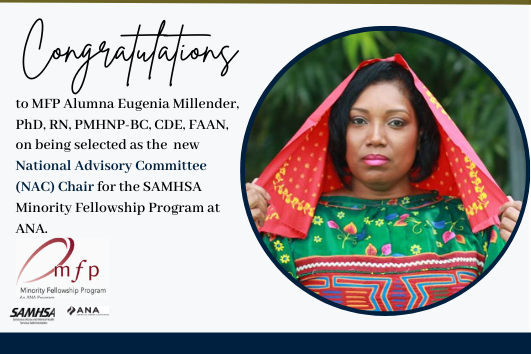 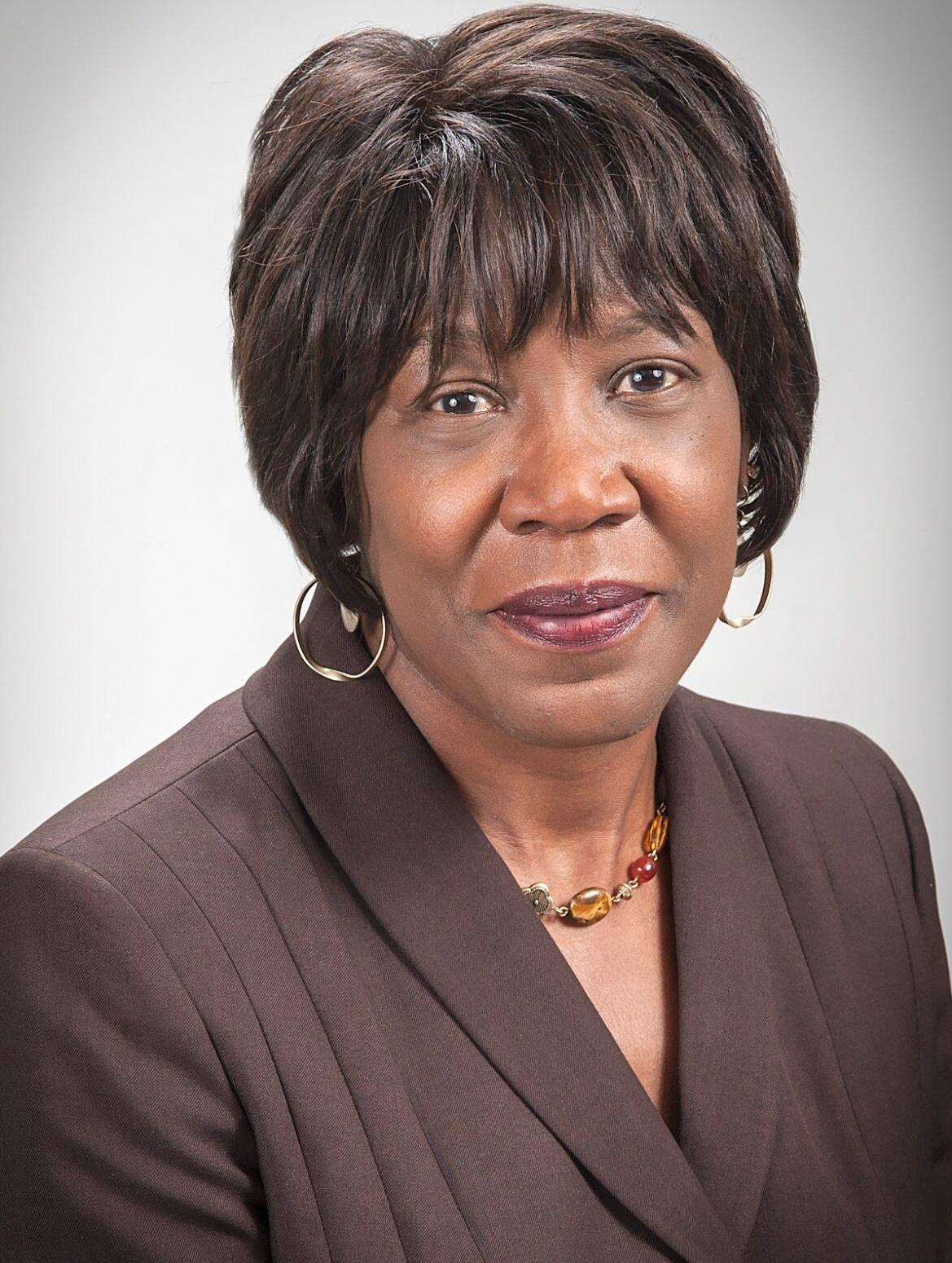 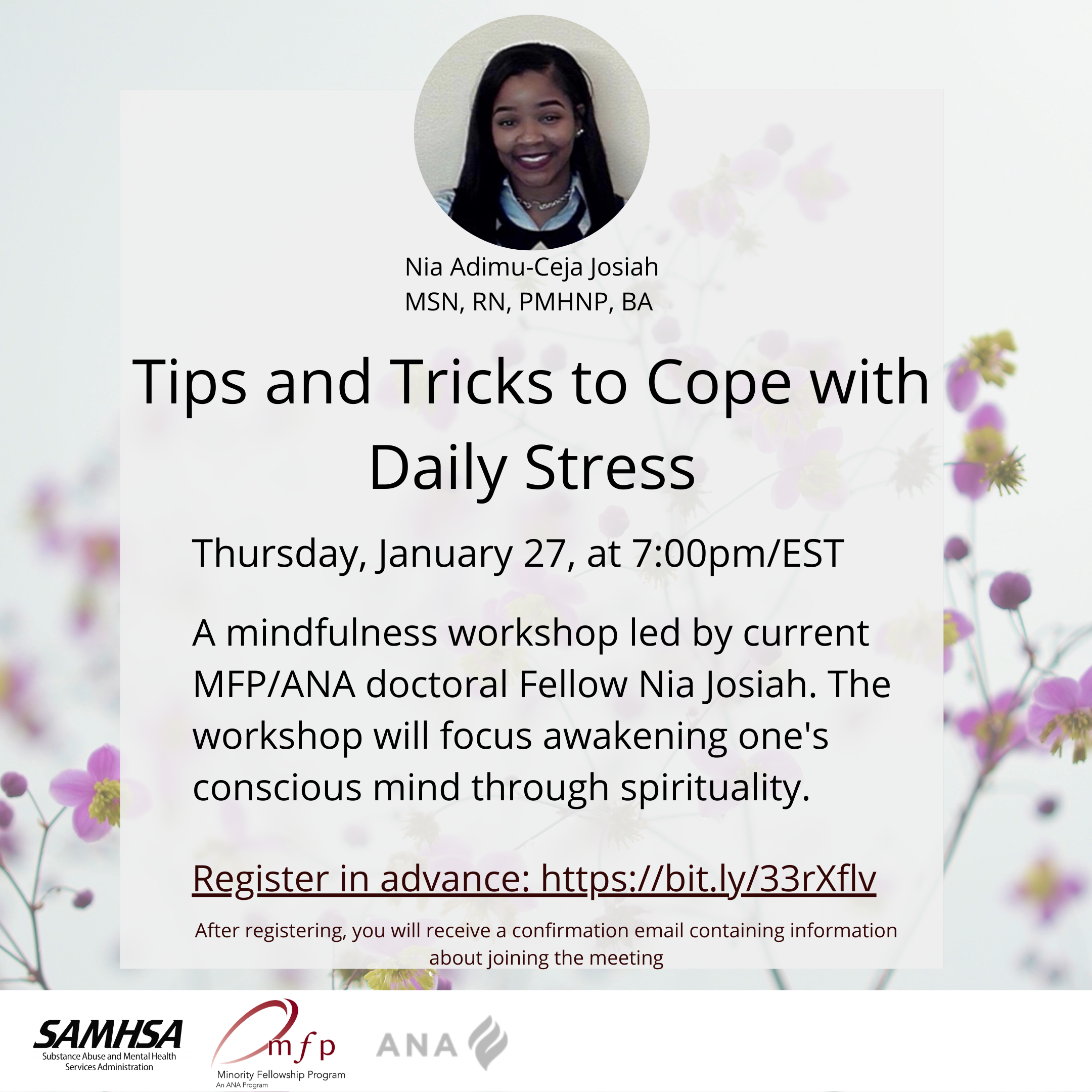 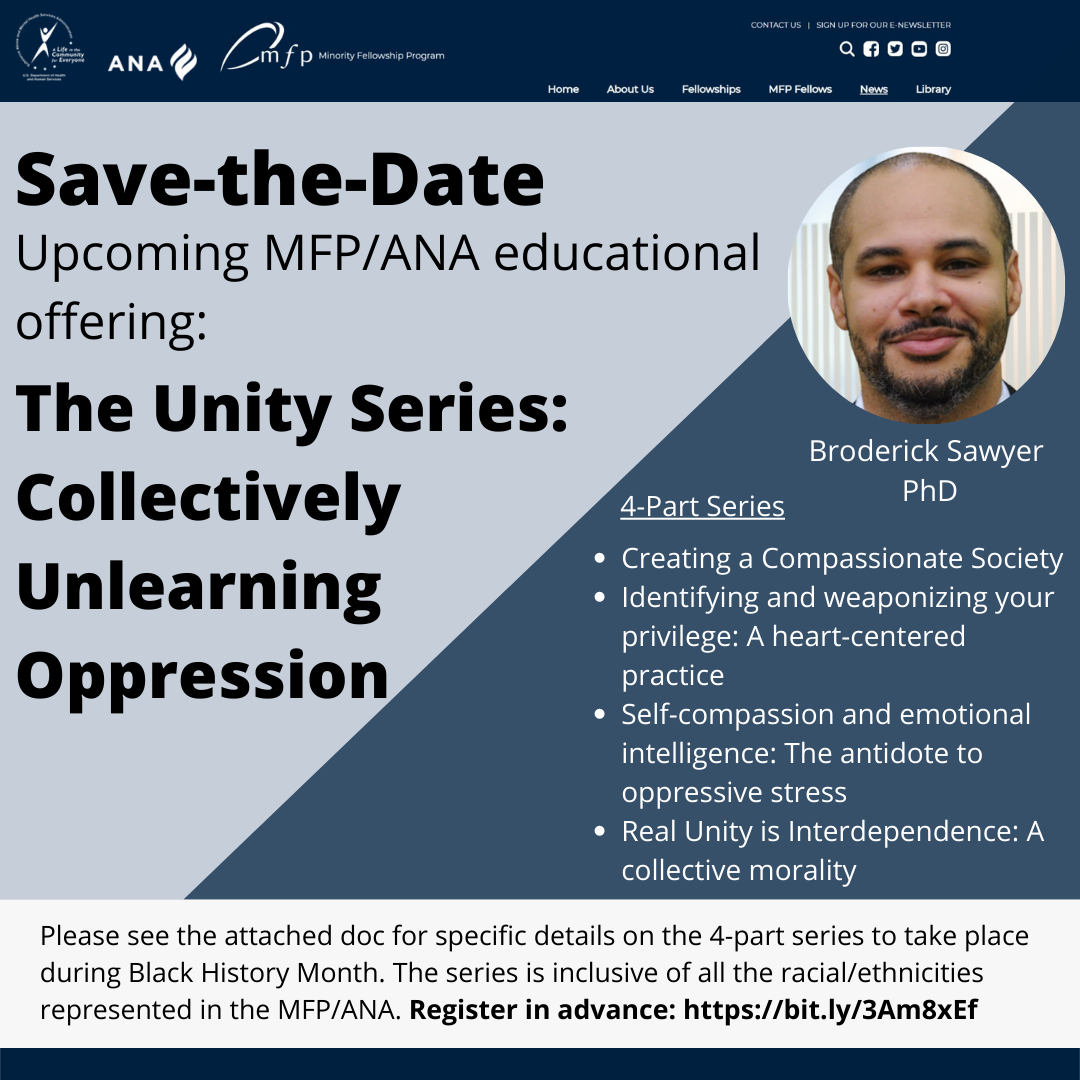 Join the first of a four-part series featuring Broderick Sawyer, PhD.  For further information on the topics within the series and to register in advance, click here 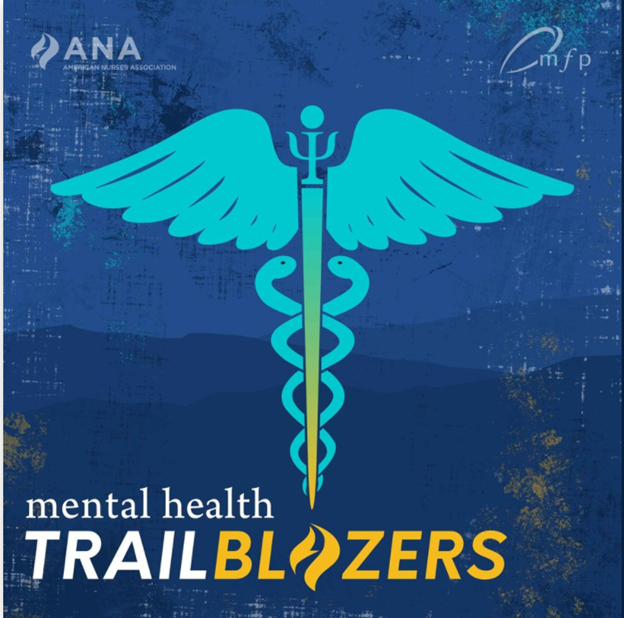 Hear the groundbreaking journeys of black, indigenous and other peoples of color, psychiatric and mental health nurses, in their quest to meet the urgent and unmet needs of minority communities in America. Missed an episode?  Listen here (opens new window).

Missed the MFP/ANA Virtual Intensive Summer Institute? Check out the schedule-of-events, bios of speakers and moderators, and view all the recorded sessions here: emfp.org/library/continuing-education/mfp-2021-virtual-intensive-summer-institute

The recording and/or transmission of recorded education sessions in any format is strictly prohibited.

The following short video may be of interest to you: Meet the nurses turning their skills into business ventures (opens new window)
Nurses might be leaving the bedside but that doesn’t mean they’re leaving the profession entirely. A large contingent of nurses are striking out on their own, using their skills and experiences to form companies to fill gaps they see in the health care industry. They are providing services in everything from COVID-19 testing to online psychiatry care. Read more and view video (opens new window)
Minority Fellowship Program Call for Applications 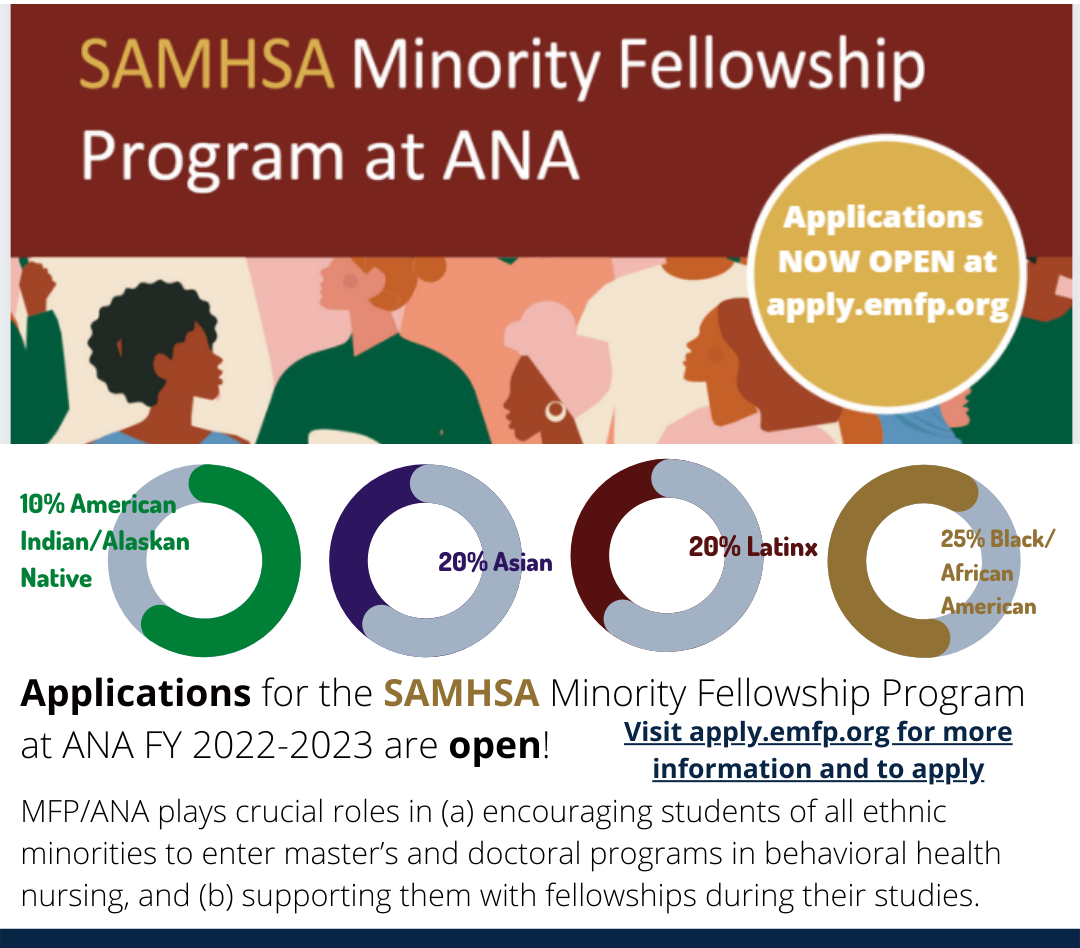 ​​​​​​The MFP plays crucial roles in (a) encouraging students of all ethnic minorities to enter master’s and doctoral programs in behavioral health nursing, and (b) supporting them with fellowships during their studies. Learn more and apply at apply.emfp.org.
Download and share the call for applications and communicate the mission and goals of the SAMHSA MFP/ANA among your networks by visiting our recruitment toolkit at https://emfp.org/library/recruitment-toolkit… (opens new window).

The Substance and Mental Health Services Administration (opens new window) provides COVID-19 guidance and resources to assist individuals, providers, communities and sates across the country. The website is updated daily.

Funding for the MFP e-Newsletter was made possible (in part) by Grant Number 1H79SM080386-04 from SAMHSA. The views expressed in written training materials or publications and by speakers and moderators do not necessarily reflect the official policies of the department of Health and Human Services; nor does mention of trade names, commercial practices, or organizations imply endorsement by the U.S. Government.