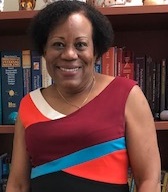 Marlene Brennen, DNP, FNP-BC, PMNP-BC, APRN is pursuing a PhD at Florida Atlantic University, Christine E. Lynn College of Nursing (FAU) where she is an Assistant Professor teaching at both the graduate and undergraduate levels. Her PhD research phenomenon of interest is stress-driven epigenomics among African American pregnant women. In 2016, Dr. Brennen attended the Summer Genetic Institute (SGI), an intensive month of education and laboratory training on genetics and genomics, at the National Institute of Nursing Research (NINR), and gained knowledge that informs her research focus.

Dr. Brennen obtained her Associate Degree in nursing from SUNY Morrisville, in New York and a Bachelor of Science degree in nursing from SUC Utica-Rome, New York. She received a Master of Science degree in Nursing from the Pennsylvania State University where her thesis focused on the relationship of health care behaviors, health perception, and the use of health care service of urban African Americans. In 2012, she earned the Doctor of Nursing Practice (DNP) degree from Florida Atlantic University. Her quality improvement project focused on the lifestyle management of African American women with hypertension.

Dr. Brennen began her nursing career practicing medical/surgical nursing, then pediatric nursing in New York City. She later practiced as an advanced registered nurse practitioner in primary care. She is an active member of the Florida Nurses Association, the Southern Nursing Research Society, the Renfrew Center, and the Association of Black Nursing Faculty (ABNF) where she has presented both podium and poster presentations.