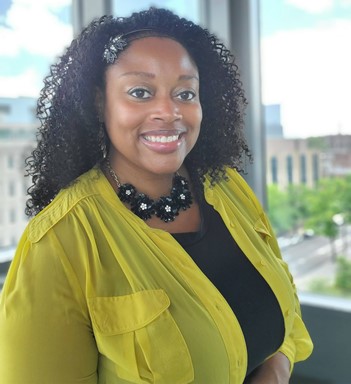 Bridgette M. Brawner, PhD, MDiv, APRN, MFP alumna (class of 2009), will chair the NAC for a second two-year appointment. As Chair, Dr. Brawner plans to advance the MFP/ANA Mission by working alongside others to devise innovative strategies to equip Fellows to address current and future mental health and substance use conditions among racial and ethnic minority populations. This includes creation of transdisciplinary, cross-sectoral collaborative opportunities and implementation of novel mentorship and training activities to prepare the next generation of behavioral health practitioners, scholars, policymakers, educators and leaders.

Dr. Brawner is a tenured Associate Professor of Nursing and Senior Fellow in the Center for Public Health Initiatives at the University of Pennsylvania (Penn). She graduated Cum Laude from Villanova University in 2003 with a Bachelor’s of Science in Nursing. While working as a Neonatal Intensive Care nurse at the Children’s Hospital of Philadelphia, she earned a Master’s of Science in Nursing from Penn as a Psychiatric-Mental Health Advanced Practice Registered Nurse in 2005—specializing in working with children and families. Dr. Brawner earned a Doctorate of Philosophy in Nursing from Penn in 2009, and was selected as the University’s inaugural Distinguished Postdoctoral Fellow immediately upon completion of the degree. In 2011, Dr. Brawner was selected as one of four scholars from across the nation to serve as a two-year Visiting Research Fellow at the Yale University Center for Interdisciplinary Research on AIDS (CIRA) through the Research Education Institute for Diverse Scholars (REIDS). In this role, she gained advanced methodological skills to explore multi-level factors that shape health inequities. Most recently, she completed a Master of Divinity in 2017 at the Palmer Theological Seminary of Eastern University.

Dr. Brawner began her clinical practice in the hospital setting and has since expanded her work to community-based practice. A recognized behavioral science and intervention development expert, she has worked on a myriad of HIV/sexually transmitted infection (STI) risk reduction programs both locally and internationally. Dr. Brawner is a dedicated community-based researcher who believes “the populations we serve must be an integral component of our work, before our grants are even written.” She conceptualizes that communities are not static entities defined by boundaries in the built environment; but rather communities represent groups of individuals (without the confines of space or time) who have shared experiences, interests or concerns. Thus, her clinical practice ranges from working with youth who are infected with and affected by HIV/AIDS, to partnering with behavioral health providers to develop standardized methods of sexual health assessment and intervention for adolescents with mental illnesses.

As a young scientist, Dr. Brawner has already received more than $1 million dollars in federal funding for her research. With a passion for mental and physical health in urban populations, she recently completed a CDC-funded research study to develop a program that helps Black youth cope with their emotions and reduce their risk for HIV/STIs. Through a health equity lens, her program of research focuses on multi-level, multi-method, biobehavioral approaches to health promotion in disenfranchised populations. There are four, interconnected arms: 1) Elucidate salient individual-level factors that protect against or increase risk for adverse health outcomes, such as HIV/STIs and cardiovascular disease; 2) Explore the social and structural context in which health behaviors occur; 3) Mobilize communities and integrate findings to identify modifiable factors; and 4) Develop, test and disseminate multi-level, comprehensive, evidence-based health promotion and disease prevention models.

Dr. Brawner is a staunch social justice advocate who believes that research can be leveraged as an advocacy tool to ensure all individuals have an opportunity to achieve their full health potential. She is internationally sought after for her comprehensive knowledge, dynamic oratory skills and ability to effect change. Her work has been featured through multiple media outlets, and she has received numerous honors and awards, including the Friends of the National Institute of Nursing Research Protégée Award in 2015. Dr. Brawner will also serve on the newly formed National Commission to Address Racism in Nursing through the American Nurses Association. She is determined to eliminate health inequities, and is excited to lend her expertise in a second term with the MFP to strengthen the behavioral health workforce.